September 14, 2019
I meant to review Ginger Gold and Zestar last week, but got busy with other posts. And I'm super glad because my review of Zestar changed with one more week to ripen.

Ginger Gold: Tastes like apple, nothing special in that department. But it is super crisp, which is not normal for an apple that ripens in August and September. This is a good early season apple because there is nothing off-putting like the toughness of the skin or the mushiness of the inside.

Rowen Jacobson says in Apples of Uncommon Character that Ginger Gold is named for the wife of the farmer who discovered/developed the apple, not because it has a ginger flavor. I don't taste any flavor at all.

Zestar: Last week, this apple wasn't quite ripe. It was crisp and juicy, but nothing special. This week, it tastes like an Apple Juice Slushy. The flavor is not the special thing, but the texture is both crisp and juicy. I've eaten more than one Zestar today. I love this apple.

We looked forward to this apple all year because it was so good last year. It's interesting to see the flavors change a bit from year to year. But the crisp, juiciness is still there with Zestar. As early as it ripens, we would love to have Zestar in our home orchard.

Unnamed: We drove down some country roads yesterday while running errands and I stopped to pick an apple from  tree growing by the side of the road. Once you have eyes to see them, you can see apple trees everywhere here in Wisconsin.

I don't know the name, but here is a picture: 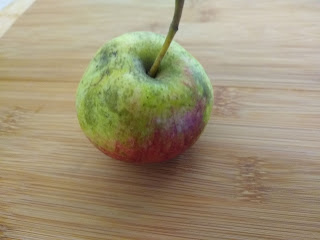 The flavor was tart on the verge of sour and the skin and texture was really tough. Nothing to make me want to go back again.

*After trying a really good caramel apple a few weeks ago, I decided that I wanted to learn to make caramel dip for apples. If homemade ice cream can be so much better than store bought, wouldn't homemade caramel dip?

I made my first attempt yesterday, and it was too butterscotch-y. Emma thinks it is the best caramel she's had, but I'll keep working.