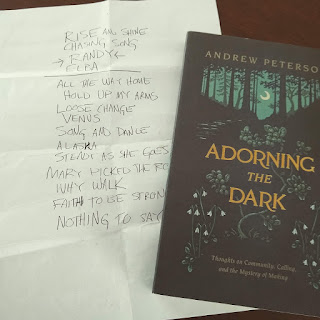 I collect tickets. I've got just about every ticket I've had since the first MLB game I went to as a kid (Texas Rangers vs. Seattle Mariners).

When I was about 15, I set up the sound system for an Andrew Peterson concert at our church. When we were tearing down and cleaning up, I found his set list and put it in with my tickets. The paper in the picture above is that set list.

I've followed Peterson's career and enjoyed his creativity ever since. At Christmas, I play his song "Deliver Us" from his Behold the Lamb of God Christmas Opera. We knew we belonged at Southern Seminary when we pulled up to the campus hotel at 12 am and found the desk guy reading "Monster in the Hollows." We've worn out his copies from his Wingfeather Saga (we almost gave one of our kids a middle name from those books).

Now, I'm excited to dig into his book on Christianity and creativity. The title has so much depth. This reminds me of Flannery O'Connor's Mystery and Manners, Eudora Welty's One Writer's Beginnings, and Bret Lott's Letters and Life: On Being a Writer, On Being a Christian.

This Christmas, pick up Behold the Lamb of God and enjoy "Deliver Us."