What to do with a Fresh Ham

I'm not the only person googling for a fresh ham recipe, but most of the recipes I found don't turn out like a smoked ham. I learned the hard way that you have to smoke the ham if you want it to taste like something for Sunday dinner.

I ordered our ham from the butcher and thought fresh was fine. It was not fine. Fresh hams and fresh ham steaks are nothing like what we know. If you cook a fresh ham steak in the oven, it turns out white and tough. Don't do it.

This is what I do:

Tips
(The picture below is my Weber grill set up to smoke some pork belly from that same hog.) 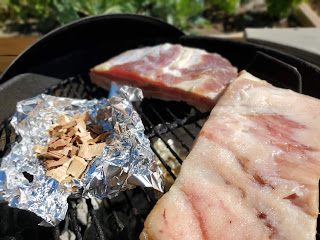